Scientists From Sevastopol to Develop a Diver Android 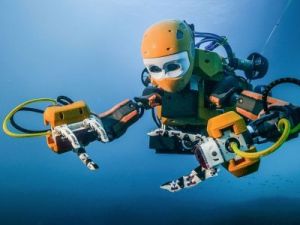 OREANDA-NEWS. Scientists from SevSU (Sevastopol State University, Crimea) started working on a diver robot which can perform various tasks at great depths. The research is being done jointly with the United Shipbuilding Corporation and the Chelyabinsk Scientific and Production Association "Android Technics".

“Existing robots require the participation of the operator, and we offer telecontrol with the help of an exoskeleton. Human movements are transmitted via communication channel, and the robot under water repeats these actions”, said Vladimir Nechayev, rector of SevSU. “At the next stage, some of the reactions and actions of the robot can be automated, and it can do some work under water independently, without operator’s participation.”

Developments will be practically applied in the studies and development of the world's oceans - robots will be able diving to depths dangerous for a human.

“Underwater robots are needed to minimize a human work in a complex and aggressive environment”, Nechayev added. “Carrying out deep-sea work with human participation is not only dangerous, but also extremely expensive. Robots can be used in the construction and maintenance of bridges, underwater pipelines, ship cleaning, research of marine depths and rescue operations.”

The project will be developed for three years. Android robot will be “taught” to analyze the information received from sensors and cameras and to make independent decisions.

Earlier it was reported that Sevastopol State University will also launch a Master's educational program on "Underwater Robotics". Students will not only get all the knowledge and competencies necessary for working in leading specialized companies, but they will also take part in the development of an anthropomorphic underwater robot, the goal of which is to facilitate and replace the diver’s profession. The most motivated and talented undergraduates will have the opportunity to become members of the scientific group that is working on the project.