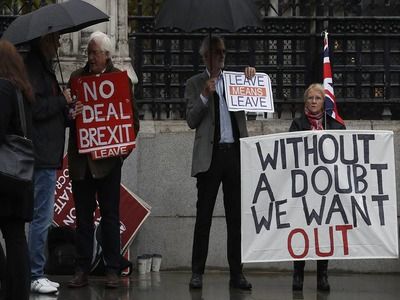 PoliticsInterstate relationsMinistries and departmentsDiplomatic organizations
OREANDA-NEWS. The UK government has presented Parliament with a new Brexit bill based on an agreement on October 17 for the kingdom to leave the EU. According to the British television channel, on Monday evening, deputies began the first reading of a 110-page document, explanations for which occupy another 125 pages.

To manage to implement Brexit before October 31, the Cabinet allocated only three days for consideration by the House of Commons. After that, the House of Lords will also consider it, and then it will be transferred to the signature of Queen Elizabeth II. There is a clause in its text that the law can be adopted in record time, although a minimum of 21 days should be allocated for consideration of international agreements by the parliament.

Another paragraph of the bill eliminates the need for a separate parliamentary vote to approve a deal with the EU. As indicated in the Cabinet, it will be considered approved by Parliament upon the adoption of the law in the second reading, which should take place on Tuesday. According to the English newspaper, British Prime Minister Boris Johnson has the necessary support to win the vote.