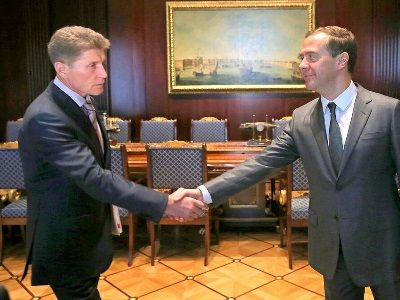 In addition, 1.5 bln Rubles for Solution of Social Problems will Received Primorsky Krai

OREANDA-NEWS  Primorsky Krai will receive a subsidy of 850 million rubles from the reserve of the Federal budget for solving social and economic problems.

This was announced by Prime Minister Dmitry Medvedev at a meeting with acting Governor of the region Oleg Kozhemyako at the airport of Vladivostok. According to Dmitry Medvedev, there are a lot of tasks to be solved.

It is also reported that the region will receive 660 million rubles for the purchase of medical equipment and repair of the stadium in Vladivostok.

"I want to give you document – I signed an order to allocate from the reserve Fund subsidies to the budget of Primorsky Krai in the amount of 850 million rubles to ensure balance. Simply put, to solve social and economic problems, and there are a lot of them, which are facing the Seaside cream and you, as a leader," Medvedev said.

"I believe that this should help to resolve urgent issues," the Prime Minister said.

The region may also enter into a pilot project to provide free medicines to children. Oleg Kozhemyako addressed the Prime Minister with a request. Dmitry Medvedev invited the administration to prepare the relevant documents.

"I know that the government is preparing a decision to include several regions in the pilot project on free provision of medicines for children. I would like to ask you that Primorye, taking into account the great need, the importance of this, a large number of children, be included in this pilot project to provide children with free medicines," Kozhemyako said.

After the meeting with the head of the government Kozhemyako explained to journalists that participation in the pilot project involves changing the form of providing children with medicines in the territory of the region. "It is assumed that the drugs will be received free of charge in pharmacies by those who need them. After the adoption of a number of laws, we switched to monetization, when citizens received an average cost, about 800 rubles, for drug provision and could not always drugs buy," the acting Governor said, stressing that participation in the project will significantly improve the provision of children with necessary drugs.

The Prime Minister made a stop at the airport of Vladivostok, heading to the APEC summit, which will be held in Papua New Guinea.