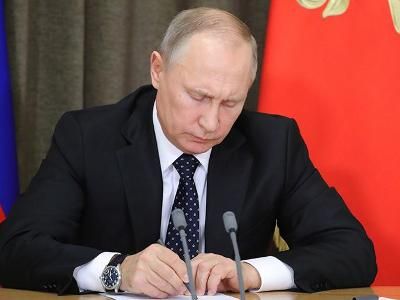 OREANDA-NEWS. Russian leader Vladimir Putin has published a decree on a new composition of the Presidential Council for Civil Society and Human Rights.

Valery Fadeyev, the journalist and the member of the Civic Chamber of Russia, was appointed a chairman.

The previous head of the organization, Mikhail Fedotov, was dismissed in connection with reaching age of 70 years, the upper limit for public service. It became known about the forthcoming resignation of the chairman on October 17, and the members of the Council wrote an appeal to the President asking him to leave Fedotov in his post due to his “personal merits” and “unquestioned authority”.

The composition of the organization has also changed: several well-known human rights defenders were excluded from it, while journalist Kirill Vyshinsky and several more person joined the Council for Human Rights.

Now the Council includes the Executive Director of information agency Russia Today Kirill Vyshinsky, the Ombudsman in the Sverdlovsk Region Tatyana Merzlyakova, and the President of the Center for Applied Research and Programs Alexander Tochonov.

The political scientist, the associate professor of the Department of Public Administration of The Russian Presidential Academy of National Economy and Public Administration Ekaterina Schulmann, the head of the Voskhod human rights organization Yevgeny Bobrov (who was a Deputy Chairman of the Council for Human Rights), the head of the Agora human rights group Pavel Chikov, and the Higher School of Economics professor Ilya Shablinsky (who was a Chairman of the Electoral Rights Committee of the Council) were excluded from the organization.