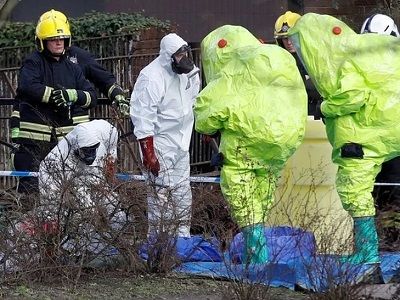 OREANDA-NEWS Vladimir Putin said that the Russian authorities know the identity of the suspects in the case Skripal.

"We know who they are, we found them," the Russian leader said during a plenary session at the Eastern Economic Forum (EEF).

He also added that it is about civilians, and expressed hope that "they will appear, all will tell". "I want to address them, let them come somewhere in the media. There is nothing particularly criminal there, I assure you," Putin concluded.

On the fourth of March in Salisbury were poisoned former officer of GRU (Russia's military intelligence service) Sergei Skripal and his daughter Julia. Mr Skripal is 66, and Yulia is 33. This provoked a major international scandal. In London said that the incident involved the Russian Federation. Moscow categorically denies this.

The Russian side has repeatedly demanded access to the investigation and the injured citizens. The British authorities ignored all requests.

The former head of the British foreign Ministry Boris Johnson has accused Russia. He called the "evidence "of her guilt "overwhelming." However, the charges were false. The head of the clandestine laboratories UK Ministry of defense said that the experts are unable to identify the source of origin of the substance that poisoned Skripal. It is assumed that the Skripal were exposed to the combat nerve agent of the family "Newcomer", applied to the door handle of their home.

In mid-May, the ex-GRU officer left the hospital, his daughter was discharged in mid-April. She said she would return to Russia.

In early September, the British side showed pictures of two "suspected" of poisoning Skripal, claiming that two officers of the GRU — "Alexander Petrov" and "Ruslan Bashirov". At the same time in London immediately made a reservation that the names are not real.

In Moscow said that these names of Russia "do not say anything", and again urged Britain to move from accusations and manipulation to cooperation.