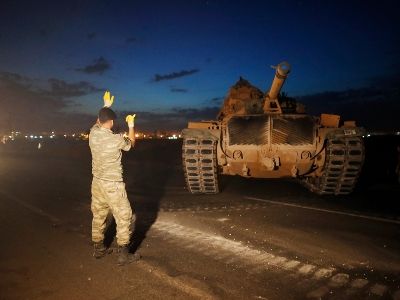 OREANDA-NEWS. Dmitry Peskov, the spokesman for Russian President, confirmed the words of Turkish leader Recep Tayyip Erdogan about contacts between Moscow and Ankara concerning military operation Peace Spring, which the Turkish army started in the north and northeast of Syria last week.

According to Peskov, there were certain contacts and negotiations on this topic between the authorities of the countries. The spokesman said that the contacts were carried out through the Foreign Ministry, and mentioned the existence of a communication channel between Russian and Turkish military men.

The Kremlin representative also answered a question about the possibility of involving Russia in the operation. “Well, we would not even want to think about such an option,” he said. “I have nothing more to add. There are communication channels between our military men for it, which I have already talked about.”

Commenting on the risks that may arise during the operation, Peskov recalled that the Kremlin had previously spoken about the undesirability of actions that could hit the process of conflict settlement in Syria.

Answering a question about the moving of Turkish troops towards the Syrian government army, Peskov noted that this was a consequence of the agreement of Syria and the Kurds through the mediation of Russia.

Speaking about whether Turkey has achieved its goals in the operation and whether it can withdraw troops from Syria, the Kremlin spokesman said that only the military are able to answer this question.