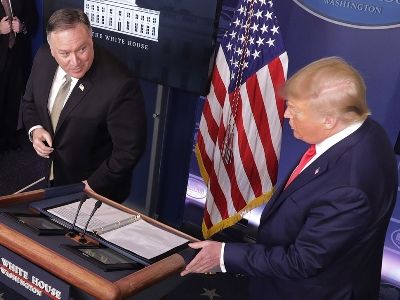 Trump and Pompeo Accused WHO of Mistakes Made during Epidemic

OREANDA-NEWS. US President Donald Trump and Secretary of State Mike Pompeo during a briefing in the White House said the World Health Organization (WHO) made mistakes during the coronavirus epidemic.

According to Trump, WHO received funding from the United States in the amount of 452 million dollars in 2019, but was mistaken about many things. In particular, the President accused the organization of a late hazard warning. He also admitted that Washington will review its funding for the WHO and maybe stop allocating money.

Pompeo agreed with the opinion of the head of state, saying that the WHO did not live up to expectations. He also did not rule out a decrease in funding of the WHO and a change in its leadership in the future. At the same time, the head of the Department of State said that now is not the best time to change the current chief of WHO Tedros Adhanom Ghebreyesus.