Skolkovo Will Participate in Development of Rules for Regulating Global Big Data Industry
Science and engineering, 24.01.2020, 12:09 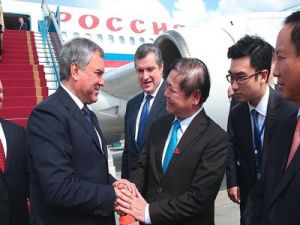 OREANDA-NEWS. Lawmakers from Russia and China can create a separate working group to discuss issues related to the development of the digital economy. This was announced on Thursday by State Duma Speaker Vyacheslav Volodin, closing the fifth meeting of the inter-parliamentary commission on cooperation between the Federal Assembly and the Standing Committee of the All-China Assembly of People's Representatives of the PRC.

"Our task is to do everything to legally ensure the decisions adopted at the level of our heads of state, on the other hand, to ensure that the parliamentary dimension also develops dynamically", said the speaker, thanking the Chairman of the Standing Committee, Li Zhangshu, for his initiatives. “It would be right for us to work them out within the framework of a bilateral commission and enter new forms of cooperation. It’s about creating, perhaps, a separate working group on the development of the digital economy”, Volodin continued.

According to him, this segment "more and more determines the future development" of the two countries. “We consider your proposal in this area not only to support, but also to do everything possible so that we can develop common approaches and build more effective work in the field of scientific and technical innovations”, the speaker concluded.

“I really want that during my current visit we would talk and exchange opinions on such important issues as borrowing your experience in the sovereign management of the Internet and monitoring activities in the cyber sphere”, said Li Zhanshu. I know that you have there are some good laws in this area". He added that he instructed the head of the constitution and legal committee to discuss this issue with Russian colleagues.