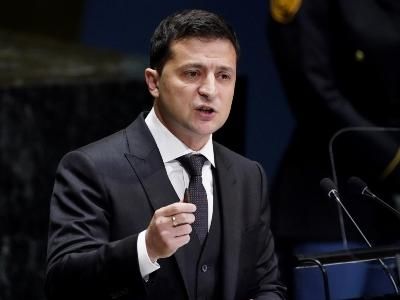 OREANDA-NEWS. President of Ukraine Volodymyr Zelensky during a joint briefing with Latvian President Egils Levits said that Kiev will wait for 7 days of silence in the Donbass for the withdrawal of military forces. The mission of the Organization for Security and Cooperation in Europe (OSCE) must confirm compliance with the ceasefire.

“We will wait 7 days of silence. For us, the OSCE is an indicator, it should say: “Yes, there were no shots for 7 days.” Today I know that we have been quiet for 2 days. We will believe, we will wait for silence for 7 days, and then we will talk about withdrawal.”

The Ukrainian leader added that the “Steinmeier formula” can be implemented in the new law on the special status of the Donbass only after the meeting of the “Norman Four”. Zelensky said that the exchange of captives, as well as the withdrawal of weapons in the area of ​​the settlements Zolotoye and Petrovskoye, are the necessary conditions for starting a discussion of the draft law.

On October 15, the Russian senator Alexei Pushkov emphasized that the demand of Ukraine to dissolve the self-proclaimed Donetsk and Lugansk people’s republics in exchange for the implementation of the Minsk agreements is unacceptable and makes the agreements senseless.

On the same day, Daria Olifer, the press secretary of the representative of Kiev in the contact group on the Donbass Leonid Kuchma, called the conditions under which Ukraine would fulfill the political part of the Minsk agreements, they are the dissolution of Donbass republics, the demilitarization of several settlements in the Donetsk People’s Republic, the ceasefire, and the withdrawal of troops along the whole length of the front.